For more information: sales@hk-rfid.com
Posted by Francis Tai at 18:53 No comments:


For more explanation, please click on this youtube video (available in cantonese only)
Posted by Francis Tai at 19:25 No comments: 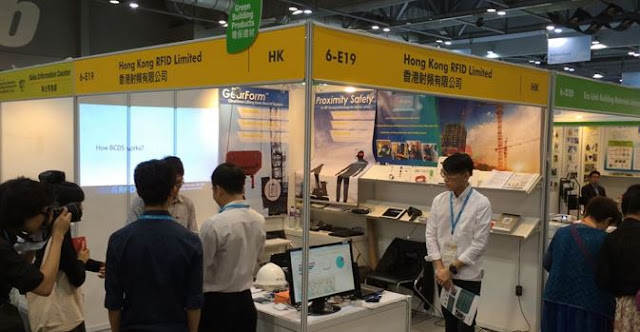 The 10th Hong Kong International Building and Hardware Fair has just come to the end gratefully. The exhibition has lasted for four days, from 28/10 – 31/10 and has successfully attracted tremendous amount of construction-related visitors and exhibitors worldwide. All participants have benefited from this opportunity to communicate and shared the latest technology that applicable in construction industry.


Internet of Things for Building (IoTB)
Being the major theme of our exhibition this time, IoTB has successfully drawn numerous attentions from the visitors.
IoTB is a well-designed system which supported by both software (online cloud platform, called BCDS) and hardware (RFID tags and readers).
With embedding RFID tags in pre-production stage, IoTB aims to link all building components such as precast concrete walls, floor panels, aluminum window frames etc. to BCDS online cloud platform. In order to enhance accuracy and convenience in construction management, IoTB allows users to record production data, monitoring the progress of the construction and obtaining real-time management information such as cost effective indicators, assembly report, etc.

GearForm™
GearForm™ is a cloud-based lifting gear record system that attractive to visitors who need to manage a huge number of lifting gears in construction site. This cloud platform which also provides an auto-alert on the expiry date of those safety forms.


Hong Kong RFID is glad to achieve great success in this exhibition. We are looking forward to participating in future exhibition to promote our RFID products and solutions to the public and facilitate exchange of ideas in the industry.

How to push a simple URL to smartphones? That is a billion dollar question.

QRcode still remains popular even though it requires rarely-installed scan-apps. Many users might not realize that many install messaging apps like LINE or WECHAT can scan QR code too. But until the day all camera apps have scanner feature built-in, it won't take off as the most popular method.

Android Smartphone has the next-best method called NFC, which is useful to pick up URL without any APP; that leaves the lonely and helpless iPhone users.

It is a well-known fact that all street promoters who are delivering FREE ice-cream in return for loading a URL or pressing LIKE a Facebook page or installing an APP, hates iPhone very very much. It is extremely hard to push a message on iphone even with iBeacon technologies, APP-support is a luxury for a short marketing campaign. The most common method is manual key-in search words in itune store.

At the moment, Chrome is the only browser that supports Eddystone URL beacons. BUT, it won't be long for other OS or App or Browser in the same ecological system doing the same. Why not? they got to have something for their endless update, right?

For iphone users who believe they approached a Eddystone beacons broadcasting URL, and for the promoters who are broadcasting a URL, this is what will happen;

A demo for a iphone to get a URL, by just check on Notification, in Chrome section.

The beacon in the screen: HKRAT-BT02

The Setup procedure is simple:  link.